Hot Summer Nights is living up to its name. So far, it has delivered stellar performance, but we do hope for some "June" weather for the next two weeks!

As usual, we kicked off at Stephen Lake where a large crowd got an overview of HSN18. This is always one of our favorite concerts, because we love to see families enjoying beautiful music. One young musician even came prepared to step in if needed. 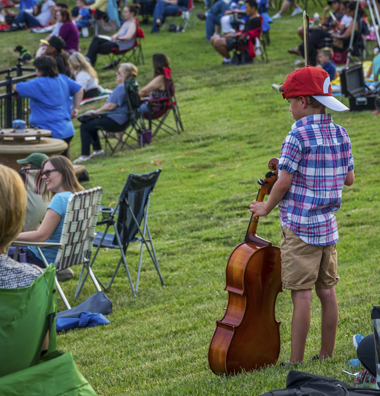 The HSN Music Academy was held at Christian Fellowship Church. Reports from students and parents were enthusiastic. Sarah Williams and Briana Frieda kept the student engaged and playing. 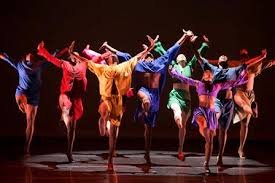 Our opening Pops concert was Confluence, a collaboration with Missouri Contemporary Ballet, above (following the 2016 Crushing Perceptions joint venture). Evensong, at the Missouri United Methodist Church, offered a choral and orchestral concert. Verdi Requiem was a moving tribute to the late Hugo Vianello.

The city of Columbia has named the alley on the south side of the theater Vianello Way, a fitting and lasting memorial to the symphony founder and conductor emeritus of the Missouri Symphony. 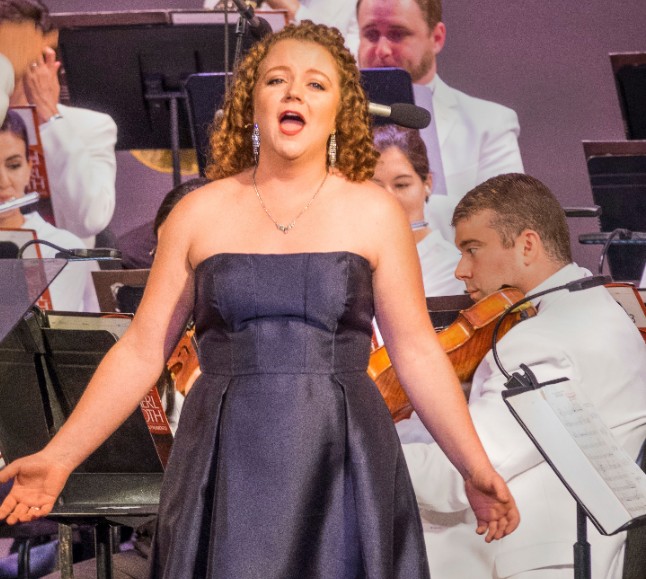 "Movie night" is fast becoming a HSN tradition, and this year's A Night at the Oscars offered a variety of music and clips. Luca de la Florin played Gabriel's Oboe from The Mission which received a rave review from the crowd and an Oscar from Kirk. From Los Angeles, singer Zoë Melcher wowed the crowd with "Moon River" and "Goldfinger," one an Oscar winner and one not, but both definitely HSN winners.

HSN Resident Opera artists have maintained a breakneck schedule, visiting Lee School, performing at Central Methodist University, singing arias for Mostly Mozart, being guest artists for Patriotic Pops, and starring in La Bohème. I hope you got to hear these incredible singers at least once. A snippet overheard at La Bohème— “…New York voices in the Missouri Theatre.”  Absolutely true.

Paparazzi caught this couple on the opera's red carpet: 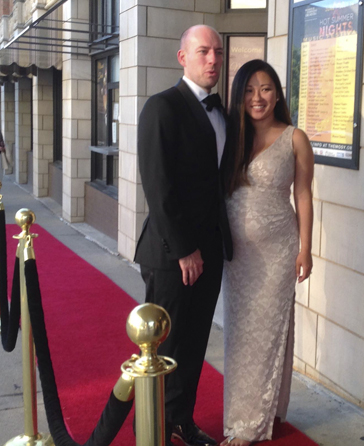 And speaking of Mostly Mozart, Josh Bledsoe did a spectacular performance of Aldo Mozart's Trombone Concerto. (at left)

Josh, the orchestra members and the other guest artists mingled afterwards at a reception hosted by Tim Ireland and Ed Hanson. 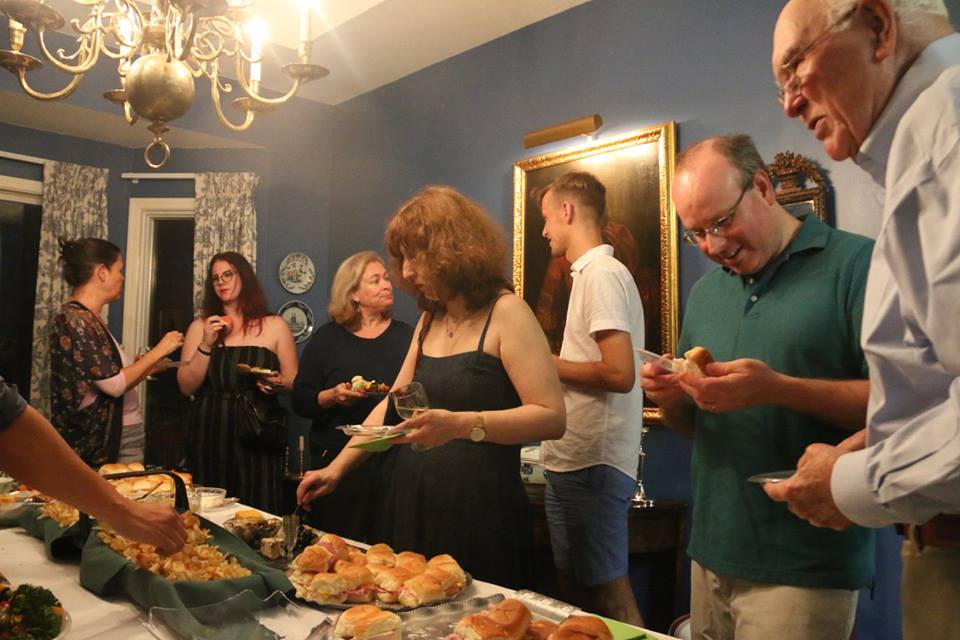 Listen to an interview with MSO Principal Clarinetist Chris Chance, who tells why he enjoys being part of Hot Summer Nights.

The Missouri Symphony Orchestra members have outdone themselves, even with the challenges of a tight schedule, and have performed each concert as if it were their favorite. They have also squeezed in a chamber recital, a performance at Lenoir Senior Living, a family concert where pizza was made on stage, a tour to the Lake of the Ozarks, a Father's Day concert at Shelter Gardens (with fathers conducting, below), the tricky accompaniment to three Charlie Chaplin shorts, and even an ensemble performance for children at Lunch in the Park. 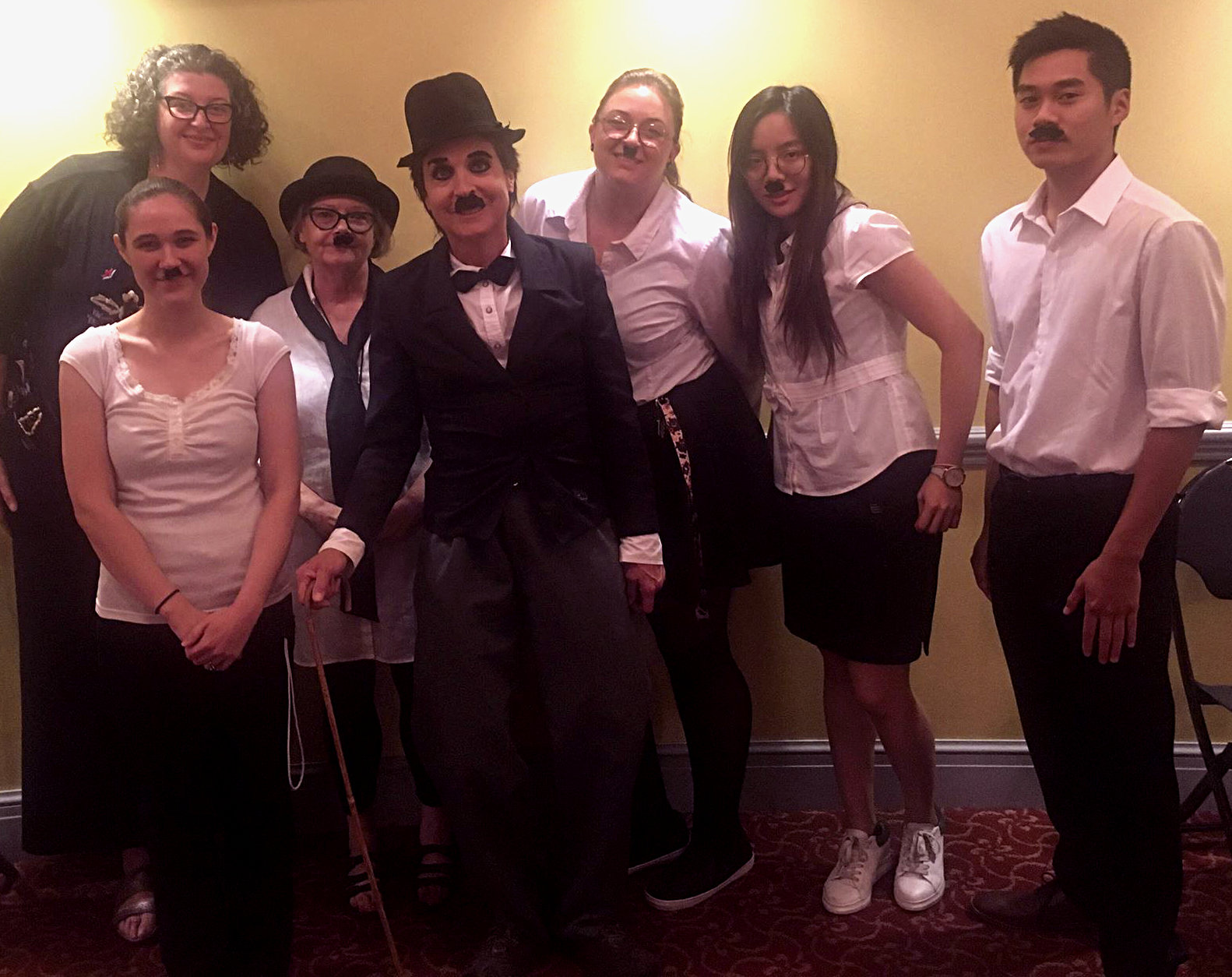 You might think that this is enough, but we still have a small season's worth of concerts to go: Dvorak's New World Symphony and Chloé Trevor performing Sibelius Violin Concerto in d minor, Op.47 on July 7. Don't miss the pre-concert chat at 6:45. PLEASE NOTE: The Box Office printed incorrect time on this concert's tickets: CONCERT TIME is 7:30 PM; PRE-CONCERT CHAT at 6:45 PM.
Two free family concerts on July 10 and 11th—Tales and Scales at Daniel Boone Regional Library, and Something Spooky at the Missouri Theatre.
The final Chamber Recital, arranged and presented by the MSO, July 9 at Broadway Christian Church.

A foot-stomping partnership with Asleep at the Wheel at 8 PM, July 13. Get your country on for pre-concert street dance at 7 PM, with the Honky Tonk Renovators and a beer tasting offered by Broadway Brewery.
Our grand finale July 14, Orchestral Fireworks with Svetlana Smolina playing Tchaikovsky Piano Concerto No. 1 in b flat minor, Op.23. Arrive early for a wine tasting sponsored by Stone Hill Winery at 6:30 PM!

I want to thank some members who graciously offered lodging to our musicians this year: Lynn Maloney, Marcia Walker, Nancy and Dave Griggs, Terry and Arlene Heins, Jim and Taffy Wallace, Rich and Peggy Poe, and Russ and Mary Still. Some of you have done this for several years, but many of you offered help during our housing crisis this year. Thank you.

On a personal note, this will be my last newsletter for MOSY. I have taken great pleasure in using this as a vehicle to keep you informed about our progress and our news. The last three years have been a great experience for me and an amazing journey. I have made many friends here and have been impressed by the loyalty and support offered to the organization.

Many of you have been steadfast for years, but I am happy to say that we have new members who are joining the board and committees, and getting involved in a myriad of ways. We have built partnerships that help us to fulfill our mission and insure a vibrant arts community for central Missouri. We have developed a strong strategic plan, a new website, and re-branded to help build new audience. The organization has a storied history which provides the building blocks for growth and success in the future.

I have been lucky to work with a talented and dedicated team of young (and not so young) staff members who brought their ideas and skills to MOSY. The organization has been fortunate to reap the benefit of their hard work and creativity. Thank you all (past and present) for everything you did to help us to be better. Kirk Trevor has been and will continue to be the moving force behind our vision—to touch people with music—and it has been a genuine pleasure to work with such a talented and caring person. His focus on young people and connecting them to music in a way that would enrich their lives is the reason I came to MOSY.

But the heart and soul of MOSY is you. The member, the listener, the donor, the worker bee, the ambassador, the concertgoer, the student, the parent, the mentor, the volunteer. Thank you for allowing me to be a part of your world.

COFFEE WITH THE CONDUCTOR

Strike Up the Band!

The Missouri Symphony is a not-for-profit arts organization whose mission is to inspire and engage diverse audiences through exceptional performances of symphonic music and to educate and mentor young performers.